30 brutal "fight-ending" moves you can learn in less than an hour!

"Why Are Big, Tough, Bad Ass Fighters
So Terrified Of
Little Bobby Taylor?"

In the most sizzling display of raw fighting savvy you'll ever witness, "little man" Taylor PROVES you can quickly learn... and just as quickly use... his personal "Bag O' Nasty Tricks" to completely obliterate someone twice your size. In fact... these vicious tricks work best when you're outweighed, outsized and out-muscled by your opponent! 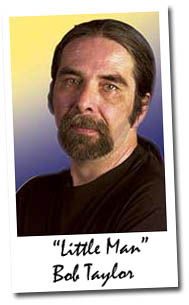 Bob Taylor is a little man with a smart mouth and a bad attitude.

So he had to learn how to fight -- and win -- against the bigger guys who looked down on him and figured him for an easy target. In school. In the jungles and battlefields of Vietnam. In the filthy streets ruled by drug-dealing gangs.

Nevertheless, Bob Taylor is widely regarded among the elite martial arts world as perhaps the best "self educated" street fighter around. Nobody who knows about Bob's fighting abilities would ever willingly go up against him without packing a loaded shotgun. Hand to hand, you will lose a fight against him, no matter how big, or muscled, or experienced you are.

What's this got to do with you? Plenty. If you too are "size challenged", or usually find yourself looking up at people when they talk to you... this is the PERFECT fighting tactics system you could ever ask for. You don't need to be strong, or agile, or possess magic powers. In fact... your size is actually an ADVANTAGE in a fight.

And if you're large size... or even a big gorilla type... then you want to see Bob's tricks before you ever leave the house again. Because, if you don't understand the advantage a smaller man has against you, you're dead meat in a real fight. What's more... knowing these nasty "little guy" fighting tricks allows you to use them too. They are just as devastating when used by a big guy against another big guy... or a vicious small guy looking to punch your lights out.

But whether you're big, or little, or in-between... you'll want to know what Bob Taylor has to offer you because...

You Can See It
For FREE, If You Want!

I'll explain in a second.

First, though... there's a few things you need to understand.

This ain't your normal martial arts, not by a long shot. Bob Taylor developed his unique style of "dirty fighting" during his 30-years of front-line combat and jungle fighting, bar brawls and ambushes, bounty hunting and busting up narcotics gangs. He was 2-tour combat veteran in Vietnam. He's worked as a private eye, a personal armed bodyguard to superstar rock groups (like Aerosmith, the Who and Led Zepplin), and has been "loaned-out" for his expertise in "hot action" canine handling to 11 different police jurisdictions. (You know it's serious shit when the dogs are called in!) He's also a recognized "Chi Master" -- at an infamous Soldier of Fortune convention, he drove a steel rod through his forearm, tied it to a new Ford Mustang, and dragged the car 287 feet... without blood, without pain, without scaring. (Don't try this at home.)

What's more, Bob is among the few world-class masters left in the forgotten art of knife-throwing. (And he's a knife designer. His blades are among the most sought-after weapons in the martial arts world). He's also a master at improvised weapons -- and can stick an unsharpened coat-hanger through a car door a ten feet.

And (with Randy Wanner) he developed the world's first system of disarming an attacker holding a gun on you -- this system has been studied and used by cops all over the world for ten years. Bob and Randy developed their disarming tactics by pointing guns loaded with "Red-Jet" simunition at each other and firing. Randy nearly lost an ear. Bob nearly got a wax bullet between the eyes. It was the most viciously-real training anyone had ever done with weapons -- and they have the scars to prove it.

But... it's Bob's hand-to-hand fighting skills that have won him the awesome and unreserved respect he now has in the fighting world.

He realized long ago that a little guy actually has advantages against a bigger opponent. Think of the big guys as a battalion of tanks with no infantry support. They will knock the hell out of other tanks, crush buildings and annihilate bridges. But a squad of enemy soldiers moving fast on foot (and "under the tanks radar) planting plastic explosives by hand, would rip a gaping hole right up the middle of the tanks. Without suffering a casualty.

You see, big guys are confident from the chest up. All their lives, they've used their size, weight and superior strength to crush opponents. But from their waist down... they're vunerable as kittens.

Having someone like Bob teach you the dirty tricks and brutal finishing strikes he's learned from years of real fighting... well, it's simply the BEST education you could ever wish for. Literally in just one short hour, Bob can take you from zero to one thousand on the scale of being dangerous.

His stuff is that good.

So here's what I have for you: I hauled Bob Taylor down to the filming studio here in Visalia just last week, and spent two days videotaping the little bastard as he revealed every fighting secret he has.

I am frankly astonished he has revealed so much, to tell you the truth. I figured he'd give us a "taste" of his "Bag O' Nasty Tricks"... but he just dropped the whole thing on us. Didn't hold back even one secret.

I respect him for that. Other fighters have been hounding Bob for years to give up his secrets -- and he's just smiled that little grimace he has, and refused. These secrets have been his "ticket" to a very full and exciting career as a soldier, cop, detective, bodyguard and bounty hunter. No one, big or small, could stand against him in a fight.

And now, we have everything he knows, packed tight in the most breathtaking DVD package you've ever seen. Here's a sample of what you're about to see:

And a lot more. Bob reveals (for the first time) why he never cuts his left thumbnail (this will shock the hell out of you)... why he prefers to go against bigger opponents... why so many of the moves "regular" martial artists teach will actually hurt you as much as your opponent... and all the sneaky "psychological" tricks he uses to fool opponents in the crucial first seconds of any fight.

This is must-see stuff... for anyone who wants to know how REAL people fight. But it's especially important to see if you -- like Bob, like most guys out there -- know you're going to be smaller than the guys you're likely to come up against in any dangerous situation.

Or, if you'd rather talk with a real live person, you can call my office right now at:

Tell the operator you want Bob Taylor "Small Man's Advantage" (Department SM-199). You don't risk a penny... because of this outrageously-generous guarantee I'm giving you (which lets you see everything for FREE if you choose). When you get it, you will have a full year to watch it, train with it, use it however you wish, without any risk at all. If, during your 6-month "trial", you decide you don't want the DVD package -- for any reason, or for no reason at all - simply return it (in any condition) and you'll receive a prompt refund of your payment. Just like that. I trust you without reservation on this. Your word is gold around here - whatever you decide, we'll go with.

You can use your credit card. Your price -- which NO ONE ELSE will get -- is just $69. That's an immediate savings of $20 off the retail price this video is selling for to the "outside market". I'm giving you this instant savings because you're on my "e-Hotlist". Don't take this offer lightly.

And the guarantee means that you can freely order the video... take the full year to study every second of it... and then return it for a full refund. No questions asked. You will have seen Bob's entire "Bag O' Nasty Tricks" for FREE.

However you order, just do it right now. Because of the "overly generous" nature of this offer, I've been forced to limit my financial vunerability by only duplicating 88 DVD packages. When they're gone, I'm not sure I'll have any more made up -- it depends on how the profits (if there are any) kick out. (I fully expect to lose my shirt on this).

I know from experience that the guys who are really interested in this will call right away -- I expect these 88 DVD packages to disappear in about 3 days, max. So, you gotta act right now, while this hidden webpage is still "hot".

Don't miss out. You don't risk a penny. It's the best stuff you'll ever see, if you're serious about fighting to win. But decide for yourself.

P.S. Oh -- one last thing - I almost forgot. We've also put together - with Bob Taylor's help - an amazing little "Target" map of the human body, showing all the BEST targets for you to go after on a big opponent. Just having this "map" will erase all doubt in your mind that you can - and will, if pushed - utterly demolish anyone, regardless of size, who screws with you. And take them out quickly, in blinding pain that will make them think twice before bullying anyone smaller than them again. I've got 88 sets of these "maps" printed up, one for each video in the warehouse. It's yours to keep FREE. Call right now, you get one. You snooze, you lose!

Remember... you have a full 6-month money-back guarantee, so you don't risk a penny at any time. But you must order right now.